The key to the first three is to cook them slow and not take your eyes off them while cooking.

My dad always made us pancakes in different shapes. My nephew loved Thomas The Train and my dad would make a train engine and based on the number of wheels it had, my nephew would say the name of the engine on Thomas The Train.

As for burning bridges, you know how the saying goes…  “If you don’t have anything nice to say about someone, don’t say anything at all.” “Think before you speak.”  “You can’t un-ring a bell.”  These lessons we may have learned as children, but they apply to adults as well.   There are other lessons we learn as children (such as the 3 Magic Words That Make People Happy) that we forget as adults, but that is for another article.

If there is conflict or anger between you and someone, I would suggest writing a letter for yourself.  You don’t have to give the letter to the other person. You could deliver the letter later if you want, at a time of your choosing, when you have had time to reflect on what you want to say.

The great thing about writing a letter for me is that I get to verbalize my thoughts and feelings.  Too often in the heat of an argument, I might say whatever my mind is thinking at the moment.  Thoughts pop in my head so fast, I sometimes end up saying something I regret.  When I should bite my tongue, walk away if I need to, and tell the person I need some time to think.  The thoughts and feelings in our heads don’t speak English.  That is why we need time to verbalize them.  I write them down and get them out of my head.  Then I walk away from the letter and I can let my mind rest now that I got my thoughts and feelings in words on paper.  Now I can “let go.”  And I can come back to the letter later if I choose and revise.  Remove the items that are negative and serve no purpose.  Focus on the goal of the letter and remain positive.  Walk away, reread, and repeat if necessary. 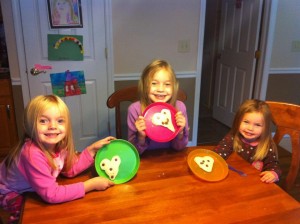 You probably won’t end up making pancakes for them, but at least you won’t burn a bridge.  As for the pancakes, hearts are easy to make!