I volunteered in the player locker room at the ATP tennis tournament in Mason, OH (Cincinnati) for 20 years.  One year, 98 or 99, Rafter won a long, late semi-final match and had the final match the next afternoon.  To help his leg muscles recover faster, his coach wanted him to quickly alternate between a really hot shower and a tub of ice cold water.  We didn’t have a tub, so we grabbed one of the tall cardboard boxes used as a towel bin.  We put in a couple plastic bags and started filling it with water and bags of ice.  As it filled, we had to wrap the whole box with tape to keep it together.  The water had to be 32 degree as there were inches of ice floating on the top when we were finished.

Rafter got in the hot shower for a couple minutes, then we helped him into the ice water for 2 minutes.  Ice and water spilled over the edge as we lowered him in.  The cold water went all the way up his legs, close to the family jewels.  He repeated this several times, with his coach’s thought that the expansion and contraction of his blood vessels would help remove the lactic acid in his muscles.

While Rafter was in the tub, he said he would pay someone $20 if they could stand in the cold water for 5 minutes.  I asked his brother, his coach and a couple of other players and coaches and had $90 waiting for me if I could stand in the cold water for 5 minutes.  I hopped in and used a little secret to last the whole 5 minutes.  I kept my legs as still as I could.  If you stay still in cold water, your body will warm the water next to your skin and will act as an insulator from the colder water… as long as you stay still and not circulate the water.  It was an easy $90!

I don’t have a picture of the cold water challenge, so this will have to do… 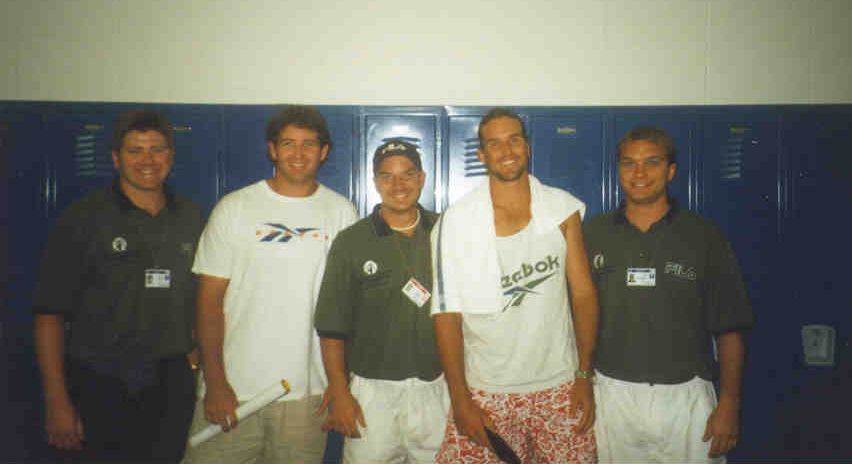